Did steam bending of furniture exist in medieval times? That is a difficult question to answer. It is very likely that it did exist. At least the technique was used in the medieval body-building industry. Wooden planks for the hull had to be bend before they were clinked with nails to the frame and the overlapping planks, and this was much easier to do with the help of steam.  Archaeological finds of lapstrake built boats also confirm that steaming of the wooden planks was used in boat building. 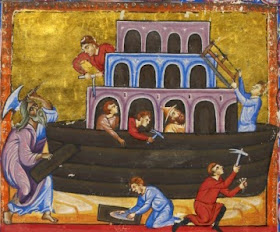 Noah building the ark. A favourite medieval boat-building scene. You can see that the boat is nailed and lapstrake built, but no steam-bending is being done here. Histoire Ancienne jusqu'à César. Manuscript Add. 15268 folio 7v. British Library, London, UK. 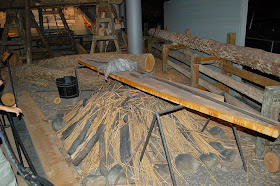 A reconstructed steam-bending scene from the Vasa Museet (Stockholm, Sweden).
The Vasa was built in 1626-1627.


Another indication that (steam)bending was used in a more medieval house-hold context are the splint boxes. These boxes were already known in early medieval times (e.g. grave finds from Oberflacht in Germany, 6-7th century) and are still in use. Thin pieces (a few mm thick) of wood were bent with help of water, heat and steam to make oval or round forms. More on medieval splint boxes can be found on the blog of the Wienische Hantwërcliute 1350. 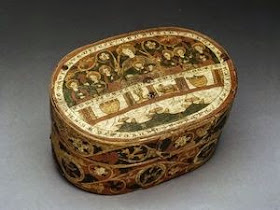 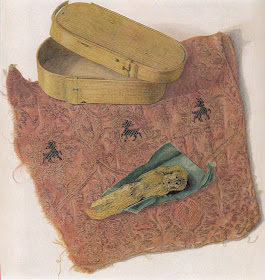 Medieval splint box with its contents: a mandrake in silk wrappings. The box was found under the choir stalls in Kloster Wienhausen, Germany. Image scanned from the booklet 'Der Fund vom Nonnenchor' by Horst Appuhn.

Whether medieval furniture also was made from steam-bend wood is not clear. Some photos of extant pieces suggest that they were bend, but no information is given if this was really the case. Nor have I been able to check if the wood grain of these chairs follows the flow of the bend rails. Anyway, I have used the steambending technique for my sedia tenaglia.

To steam-bend wood a bending jig is necessary. The wood is pressed against the jig and takes the shape of the jig. My bending jig was made of two pieces of 2 cm mdf board, which was glued together to get a 4 cm thick board, i.e. the same width as the wooden rails. I roughly used my plan of sedia tenaglia to transfer the curves to the mdf board. Then, I hammered some nails along this first sketch of the curve and placed a thin strip of wood against it. This thin strip bends easily and forms a natural flowing curve, while being kept in place by the nails. The final curve of the wooden strip was now transferred on the mdf board with help of a pencil. A band-saw was used to saw the curve, and a belt sander to smoothen it. 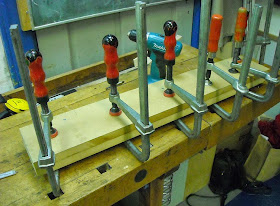 Glueing the two pieces of mdf to get a 4 cm thick board. 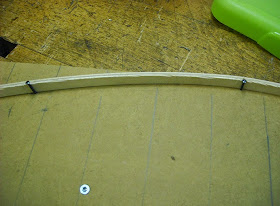 Using nails and a thin strip of wood (triplex)  to crate a natural flowing curve. The lines of the initial measurements can be seen on the mdf.


As all the wooden legs need to have the same curve, some additional part were needed for the bending jig. An end-stop was needed to ensure that the curve started at the same point for each leg. A flattening clamp was needed to ensure that no bending occurred below that point (i.e. the part of the X needs to be straight, only the backrest needs bending). The flattening clamp also made it possible to quickly slide the steamed leg into the jig. 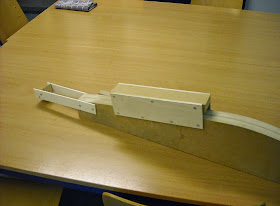 The end stop and the flattening clamp of the bending jig. 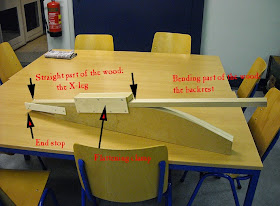 The steambox - used to steam the wooden rails - is modern made from laminated plywood. The inner edges are sealed with silicon kit. The ground surface has a slight angle towards the middle, so the that condensed steam will flow back into the kettle. In the middle of the box is a hole with a PVC pipe connected to (the lid of) a glue box beneath which is filled with water. The glue box is placed on an electric heater. Another version of a steambox can be found on the blog of Johann von Katzenelnbogen, who makes traditional and early medieval handcrafted furniture. 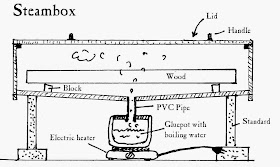 Schematic overview of the steambox. 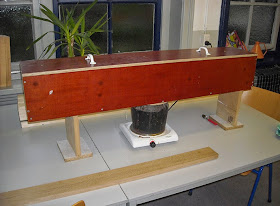 The plywood steambox with the gluepot and the electric heater in the middle.
On top of the steambox is a lid with two handles.


Two legs of my sedia tenaglia could be placed together in the steam box. They rest on wooden blocks so they do not get unevenly wet by the condensed water whichis flowing back to the PVC pipe/glue-pot. 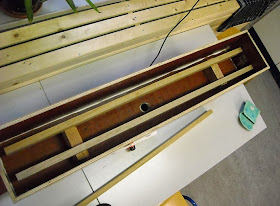 Inside the steam box. Two legs are waiting on small wooden blocks.
You can see the hole for the steam and the returning condensed water.

The wooden legs stayed in the steambox between half an hour to one hour. One at a time was taken out of the steambox with fingered oven mitts (initially the wood and the steam are hot) and quickly put into the jig. Then clamps were applied, starting from the middle and following the bend towards the end. It is necessary to have wooden blocks between the clamps and the steamed wood to spread the pressure. If you do not do this, the clamps will produce dents in the wood, which are difficult to remove. (With help of a clothes iron with steam you can try to inflate the dent again, but you must take care not to burn the wood instead). After half an hour, when the wood had cooled down, the clamps were removed and the bended rail was transferred to a spare jig, were it was clamped again for some hours. Meanwhile, the first jig could be used to bend the second rail.


The first leg I tried to bend was about one cm thicker than the ones finally I used for the chair. The thicker leg could not be bend properly and veered back to a wrong angle. Perhaps this was due to a too short time in the steambox, but I decided to reduce the thickness of the rails. The thinner rails all bended perfectly well (except one that splintered), finally resulting in a chair having a lighter weight. 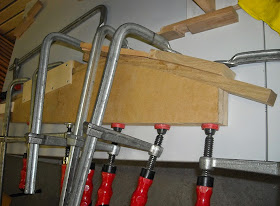 It is necessary to use wooden blocks between the iron clamps and the steamed leg of the chair. Steamed wood is soft and the pressure of the clamp will leave an ugly dent in the leg if no block is used to spread the pressure evenly. 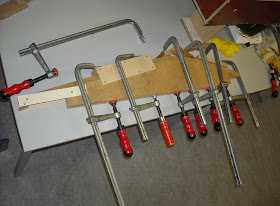 At the straight end, hardly any iron camps are used. 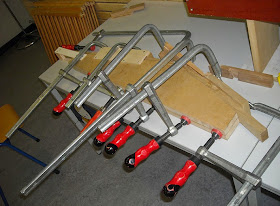 Clamping starts at the straight end and then follows to the end of the curve.
Sometimes the pressure of the previous clamps has to be increased when the bending proceeds. 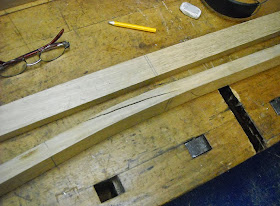 Not all bending goes well. This leg cracked and split during the bending process.
I had to make another one. Luckily it happened only once.

I will conclude the making of the sedia tenaglia in a next post.
Marijn at 23:15