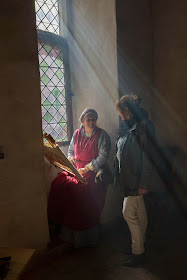 Anne embroidering in the great hall of castle Hernen. The beautiful sun rays were created by the smoke of coming from the fireplace in the next room which had a badly working chimney. Photo made by Geldersch Landschap en Kastelen.

Like the previous progress report on the Thomasteppich embroidery project, I have made a photo for most of the days from August 2014 to April 2015 when Anne did something with her part of the Thomasteppich, and turned these into another small video. During winter time not much was done on the teppich as we were working on our new house. However, the first panels of the tapestry are nearly finished, both that of Anne and Katinka.