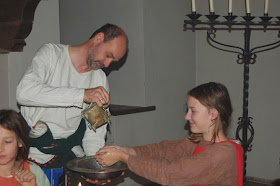 When you attend a feast at the lords castle, you will need to behave and show that you have table manners. One of the things was (and still is) that you had to wash your hands. From the 12th until the late 14th century, an aquamanile was used to hold and pour water (aqua) over the hands (manile), although the name aquamanile for the vessel was invented in the 19th century. The real name of the vessel was lavoratorium, and the bowl receiving the water was called manilia. The aquamanile was a heavily decorated vessel, often cast in bronze or brass in the form of animals like lions, griffins, stags, or men. They were a luxurious show-piece on the lords table. For more humble lords (or guild-masters) less expensive aquamaniles were made from baked clay. That aquamaniles were also used by medieval citizens is shown by the fact that they were mentioned in two (of sixty) inventories of the city of Deventer, the Netherlands. One of such a stoneware aquamanile we encountered during a visit to the Kolnischen Stadtmuseums in 2012. 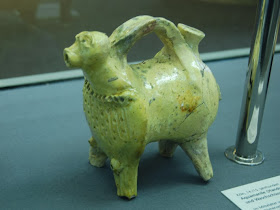 The Kolner aquamanile is 16.2 cm high and 17.5 cm long. It has a light yellow glaze with orange-brown spots. The inside is also glazed orange-brown. Dated 13th century.


Also in the Netherlands medieval stoneware aquamaniles were found: a very beautiful one in Castle Hoensbroek and two others are on display in the Booijmans van Beuningen Museum in Rotterdam. These are shown below as well as some other from the Victoria and Albert museum in London. 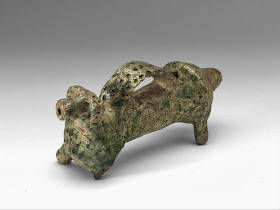 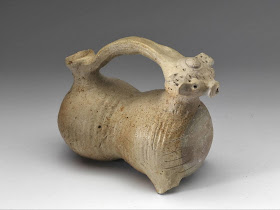 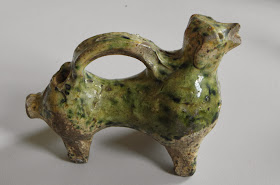 The aquamanile from Castle Hoensbroek which was found in the castle moat.
The figure is supposed to be a ram. The aquamanile is dated mid 14th century and decorated with green-tin glaze.
Image from internet. 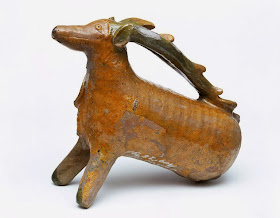 Aquamanile of red earthenware in the form of a stag covered with a yellow glaze tinged with green. It has a tubular body and the antlers lie back to form the handle. The hind legs are missing. Found in Rye, UK and dated  around 1300-1399.  Sizes: Height: 24 cm, Length: 35.5 cm. Victoria and Albert museum, London, UK. 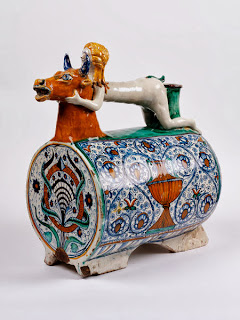 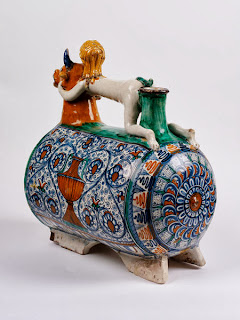 
It may not come as a surprise that we  liked to have an aquamanile on our table as well, especially during visits to chic places, like castle halls. Anne has made a lion-shaped aquamanile from white baked clay and glazed it with a green glaze both in- and outside. The pouring spout is at the lion's mouth, while the vessel can be filled with water through a hole in the middle of its back. 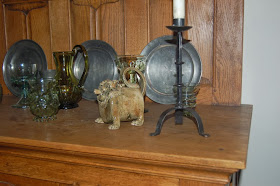 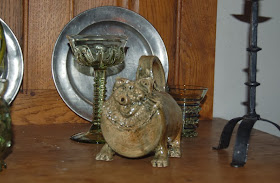 The Lion aquamanile on the dressoir in the castle hall of Castle Loevestein.

And of course we (do have table manners and) used it at our dinner in the castle hall of Castle Loevestein a few weeks ago. In the 'Mesnagier de Paris', a 14th century cook- and housekeeping book, a description is given for the water used to wash the hands:

This has been translated into the following recipe:
Boil 1 litre water with 2 branches of sage or 1 branch chamomile and 1 branch of marjoram or 1 branch of rosemary and strips of untreated peel of two bitter oranges. Infuse, pass, and serve in an aquamanile over a washing basin. 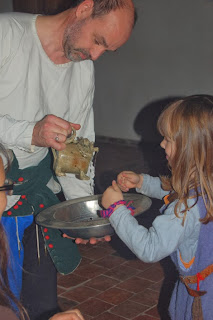 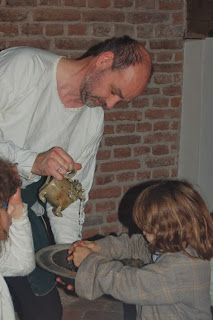 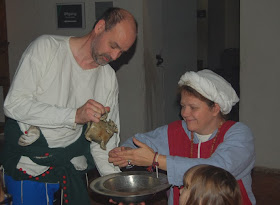 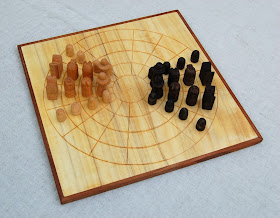 Byzantine chess or Zatrikion is a chess variant that was popular in medieval times in the Byzantine Empire. It is played on a round chess board, where the game pieces face each other on both sides. The game is first mentioned in 947 in the Arab book Murûj adh-dhahab (The meadows of gold). The writer and historian Al-Mas'ûdî (died 956 AD) connected the origin of chess in Persia under the reign of Khosraw I Anushirwan with the book Kalîlah wa Dimnah, a collection of Indian fables. On chess, Al-Masûdî wrote: ‘by far the most frequent use of ivory is for manufacture of men for chess and nard’ (nard is the predecessor of backgammon). He also described five chess variants: oblong chess (al-mustatîla), decimal chess (at-tâmma or complete chess), circular chess (ar-rûmîya or Byzantine chess), astronomical chess (al-falakîya, celestial chess) and limb chess (al-jawârhîya, which is played over a 7x8 board with 6 pieces – tongue/eye/ear/hand/foot/heart – for each side; unfortunately the rules of this game are lost). No images of a medieval Byzantine chess board are known, and, as the playing pieces are identical to normal medieval chess pieces, no specific game pieces can be attributed to Byzantine chess.

Our board is made of poplar with walnut edges. The circles and radiant lines are carved in the wood with help of a sharpened compass. The board is finished in linseed oil; the incised lines appear to have a darker shade as they collected more linseed oil. 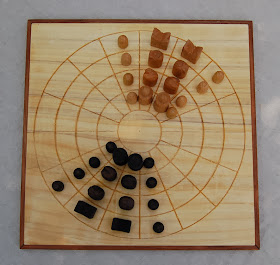 The Byzantine chess board and the set-up of the pieces.

The Sandomierz chess set, carved from bone. The two sets differentiate from each other
by the decorative double lines (see e.g. the knights at the front).

Three 14th century wooden chess pieces from Novgorod: a rook and two kings (they do not belong to the same sets). Right image from internet; numbered images from the book ‘Wood use in medieval Novgorod’, Oxbow publishers, UK. 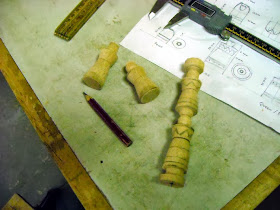 For the rooks, I used a square piece of wood. For the knights and bishops/elephants, I used a piece of beech made slightly oval. For the pawns, a 12 mm beech dowel was used as a basis, while for the king and counsellor the basic shape was turned. All decorations on the chess pieces were carved with a carving knife, while the dots and rounds were hammered in the wood with specific punches. The white set was finished with linseed oil, the black set with linseed oil mixed with a small amount of bone black.

The 'basic' turned king and counsellor still attached to each other.

The game pieces have their specific moves, identical to medieval chess, but unlike the modern variant:

The board is set up with the king and counsellor placed in the smallest ring; both kings facing each other, as well as both counsellors. Next to the king/counsellor is the bishop/elephant, followed by the knight and the rook in last ring. On each side are 4 pawns. 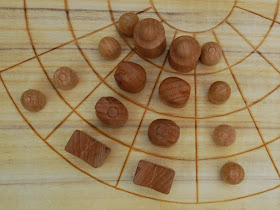 Lay-out of the game pieces.


The players decide who goes first, and the players take turns moving one piece in each turn. If a player’s King is threatened with capture, 'check' is declared, and the player must move so that his King is no longer threatened. If there is no possible move to relieve the King of the threat, he is in 'checkmate' and the game is over. Even if the King is not in immediate threat, but any possible move would subject him to capture (stalemate), he has lost the game.

Also, if one side is reduced to a king alone with no other men, he loses as a 'bare king', unless he can reduce the other player to a bare king on the very next move, in which case the game is a draw. Finally, if it can be demonstrated that neither side has enough power on the board to force a win by checkmate, stalemate or bare king, the game is a draw. 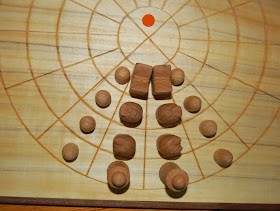 The set-up of the pieces in the citadel variant of Byzantine chess.
The white king has to move to the opposite citadel (orange dot) to obtain a draw.


There is a variant attested in the 14th century where the set-up is different. Here, the King and the counsellor are on the outer ring, followed by the elephant/bishop, the knight and the rook in the smallest ring, i.e. the opposite of the normal situation. In addition, there are 4 citadels (husûn), in shape of quarter of circle, in the centre. One can obtain a draw if a player succeeds to bring his King in a citadel (it is supposed, though the rule is not explicitly stating, that it was meant the citadel opposed to his starting sector). Play further follows the rules as in normal Byzantine chess.

This post benefited greatly from the information on the Chess Variants web page and the History of Chess page.
Marijn at 20:01 9 comments:

The medieval toolchest: the awl and the gimlet

Awls or 'prickers' are small pricking or scratching tools used in woodworking, but also in leather working. An awl consists of a long pointed iron spike set into a wooden handle. The spike may be round or square. The awl is used to make (starting) holes (e.g. for drills or nails), or to scribe lines into wood. Awl spikes are usually round when used for scratching and square to pre-puncture easily split wood for nails. Awls have not been depicted in medieval miniatures for woodworkers, but plenty examples have been found, e.g. in Novgorod, Russia. 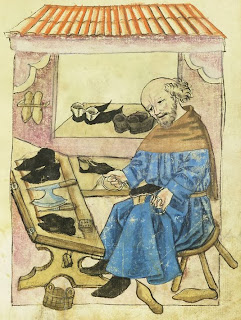 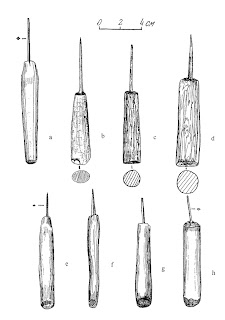 The gimlet or 'wimble' is like a small auger and similar in size as the awl. The point of a gimlet is twisted like a screw. They are used to make starting cuts for the spoon bits of the brace and larger augers into the wood. However, the cutting action of the gimlet is different from an auger as the cutting edges pare away the wood, which is moved out by the spiral sides. This also pulls the gimlet further into the hole as it is turned. Unlike the awl pressure is not required once the tip has been drawn in. 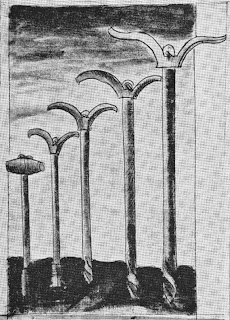 Several drilling tools. The most left are gimlets, those on the right augers.
Miniature from around 1410. Donaueschingen, Library Cod. 860. 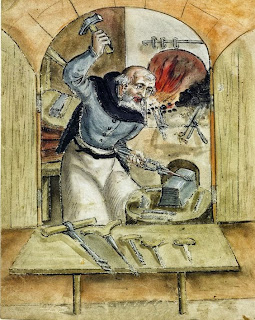 Ludwich Schwerdtfeger (1547) from the Hausbuch of the Laundauer Zwolfbruderstiftung (Neurenberg, Germany) is blacksmithing augers and gimlets. Three gimlets are shown on the right of the miniature. Folio 36 verso. 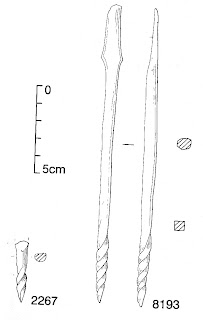 Gimlets found in medieval York: 2267 is an iron fragment with rounded squared shank. the blade has three twists and a pointed tip. Length 35 mm, width 6 mm, thickness 5 mm. Anglo-Saxon period. 8193 has an expanded lozenge-shaped tang for the handle, a square cross-sectioned shank and a blade with 5 twists and a pointed tip. Total length 171 mm, blade length 40, shank width 8 mm. Medieval period. Image scanned from 'Wood and wood-working in Anglo-Scandinavian and medieval York' by C.A. Morris.

The awl from our medieval toolchest is completely home made. For me, it has been the only attempt at blacksmithing. I used a gas-burner to heat the tip of the iron red-hot, and then hammered to it a point on an 'anvil', the head of a big square hammer. Then, I sharpened the square point  with a grindstone. Finally, the wooden handle, made of leftover stock of an unidentified piece of wood was added. We use the awl mostly as a scribing tool, and occasionally to punch holes in wood, leather or other material. The gimlet was bought with wooden handle at Deagrad tools. 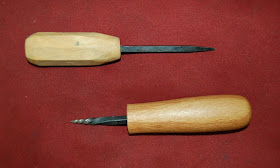